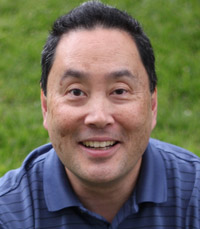 Welcome to my website! Here’s a bit of background about me:

I became interested in interactive computer graphics while I was an undergraduate at UC Berkeley. Therefore I went to UNC Chapel Hill for my graduate studies, working on tracking for VR and doing early work in Augmented Reality. For my dissertation, I built the first AR system that worked (where the virtual and real stayed registered together even while the viewer moved around). After graduating, I joined HRL, working on various projects in Augmented Reality and visualization.

After that, I helped start a new Nokia Research Center in Santa Monica, where I led a team that focused on generating new forms of mobile media, incorporating Augmented Reality and pervasive computing technologies.

I am recognized as a pioneer and innovator in Augmented Reality, and I have held prominent leadership roles in that research area. I served on the Steering Committee of the ISMAR conference, the premier academic research conference in AR. My extensive experience in industrial research includes leading and implementing research projects and demonstrations in areas such as AR, visualization, and mobile applications. I have experience in line management and team and project leadership. My track record of invited presentations, courses taught and millions of dollars in successful fundraising testifies to my communication skills. I am a T-shaped person who has actively pursued experiences and learning opportunities to work effectively with people in other fields, including interactive entertainment, experimental studies, design, mobile devices, air traffic control, and the military.

For recent examples of what my team has published, please look at the Thin VR project page which describes an approach to simultaneously achieve both a 180 degree horizontal FOV and a compact form factor in a head-worn VR display. Also check out the Light field displays project page which describes an approach to build 3D displays that enable the viewer to focus to different depths, thus reducing the eyestrain experienced in most 3D displays.

I am known for defining the term “Augmented Reality” and guiding the early development of the field, through a survey paper that is the single most referenced work in the field of AR and is included in a list of 50 influential journal articles selected by MIT Press from over 80 MIT Press journals from 1969 to 2011.

My guide to surviving graduate school has become a popular resource on the web.

In 2016, I became an IEEE Fellow due to my contributions to Augmented Reality.